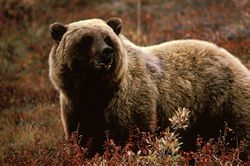 Newborn bears may weigh less than 1.1 lbs. In the Yukon River area, mature female grizzlies can weigh as little as 220 lbs. On the other hand, an occasional huge male grizzly has been recorded which greatly exceeds ordinary size, with weights reported up to 1,500 lbs.

Although variable from blond to nearly black, grizzly bear fur is typically brown in color with white tips. A pronounced hump appears on their shoulders; the hump is a good way to distinguish a black bear from a grizzly bear, as black bears do not have this hump.

Brown bears are found in Asia, Europe and North America giving them one of the widest ranges of bear species.

The ancestors of the grizzly bear originated in Eurasia and travelled to North America approximately 50,000 years ago.This is a very recent event in evolutionary time, causing the North American grizzly bear to be very similar to the brown bears inhabiting Europe and Asia.

In North America, grizzly bears previously ranged from Alaska to Mexico and as far east as the western shores of Hudson Bay. In North America, the species is now found only in Alaska, south through much of western Canada, and into portions of the northwestern United States including Idaho, Montana, Washington and Wyoming, extending as far south as Yellowstone and Grand Teton National Parks, but is most commonly found in Canada.

In September 2007, a hunter produced evidence of grizzly bears returning to the Selway-Bitterroot Wilderness ecosystem, in Idaho and western Montana, by killing a male grizzly bear. Its original range also included much of the Great Plains and the southwestern states, but it has been extirpated in most of those areas.

The grizzly bear appears on the flag of California, though they are extinct in the state, the last one having been shot in 1922.

Grizzlies are considered by some experts to be more aggressive than black bears when defending themselves and their offspring. Aggressive behavior in grizzly bears is favored by numerous selection variables.

Unlike the smaller black bears, adult grizzlies are too large to escape danger by climbing trees, so they respond to danger by standing their ground and warding off their attackers. Increased aggressiveness also assists female grizzlies in better ensuring the survival of their young to reproductive age. Mothers defending their cubs are the most prone to attacking,

being responsible for 70% of fatal injuries to humans. Historically, bears have competed with other large predators for food, which also favors increased aggression.Campers are warned to hang food, garbage, and toiletries out of reach of bears, or to use a secure bear cache.

Grizzly bears normally avoid contact with people. In spite of their obvious physical advantages and many opportunities, they almost never view humans as prey; bears rarely actively hunt humans. Most grizzly bear attacks result from a bear that has been surprised at very close range, especially if it has a supply of food to protect, or female grizzlies protecting their offspring. In such situations, property may be damaged and the bear may physically harm the person.

Exacerbating this is the fact that intensive human use of grizzly habitat coincides with the seasonal movement of grizzly bears. An example of this spatiotemporal intersection occurs during the fall season: grizzly bears congregate near streams to feed on salmon when anglers are also intensively using the river.

Some grizzly bears appear to have learned to hone in on the sound of hunters’ gunshots in late fall as a source of potential food, and inattentive hunters have been attacked by bears trying to appropriate their kills.

Increased human–bear interaction has created “problem bears”, which are bears that have become adapted to human activities or habitat.  Aversive conditioning, a method involving using deterrents such as rubber bullets, foul-tasting chemicals or acoustic devices to teach bears to associate humans with negative experiences, is ineffectual when bears have already learned to positively associate humans with food. Such bears are trans-located or killed because they pose a threat to humans. The B.C. government kills approximately 50 problem bears each year and overall spends more than one million dollars annually to address bear complaints, relocate bears and kill them.

For back-country campers, hanging food between trees at a height unreachable to bears is a common procedure, although some grizzlies can climb and reach hanging food in other ways. An alternative to hanging food is to use a bear canister.

Traveling in groups of six or more can significantly reduce the chance of bear-related injuries while hiking in bear country.

For a complete description and scientific view of these creatures go to: http://en.wikipedia.org/wiki/Grizzly_bears