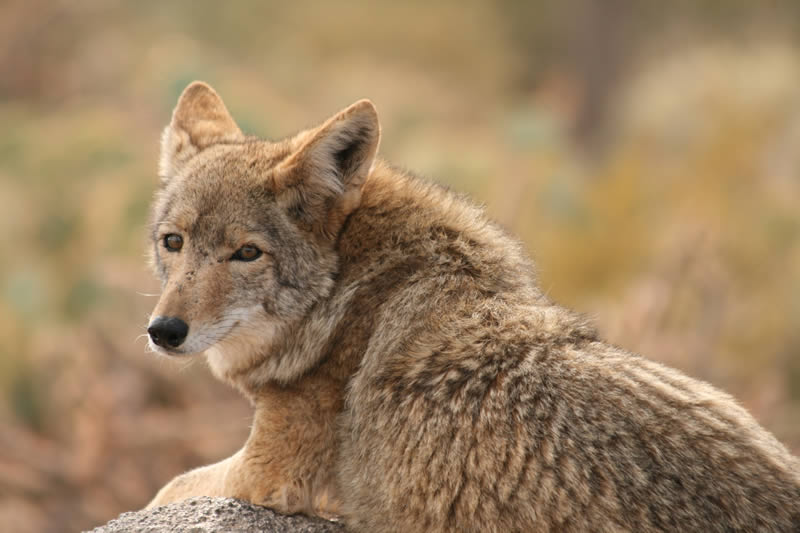 Coyotes will sometimes mate with domestic dogs, usually in areas such as Texas, Oklahoma, California and Arizona where the coyotes are plentiful and the breeding season is extended because of the warm weather. The resulting hybrids, called Coydogs, maintain the coyote’s predatory nature, along with the dog’s lack of timidity toward humans, making them a more serious threat to livestock than pure-blooded animals. This crossbreeding has the added effect of confusing the breeding cycle.

Coyotes usually breed only once a year, while coydogs will breed year-round, producing many more pups than a wild coyote. Differences in the ears and tail generally can be used to distinguish Coydogs from domestic or feral dogs or pure coyotes. 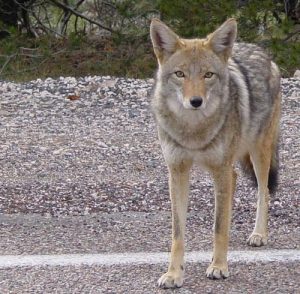 Coyotes originally ranged primarily in the western half of North America, but it has adapted readily to the changes caused by human presence and, since the early 19th century, has been steadily and dramatically extending its range. Sightings now commonly occur in a majority of the United States and Canada.

Coyotes inhabit nearly every contiguous U.S. state and Alaska. They have moved into most of the areas of North America formerly occupied by wolves, and are often observed foraging in suburban garbage bins.

Coyotes are presently the most abundant livestock predators in western North America, causing the majority of sheep, goat and cattle losses. For example, according to the National Agricultural Statistics Service, coyotes were responsible for 60.5% of the 224,000 sheep deaths attributed to predation in 2004. The total number of sheep deaths in 2004 comprised 2.22% of the total sheep and lamb population in the United States.

According to the National Agricultural Statistics Service USDA report, “All sheep and lamb inventory in the United States on July 1, 2005, totaled 7.80 million head, 2% above July 1, 2004. Breeding sheep inventory at 4.66 million head on July 1, 2005 was 2% above July 1, 2004.” Because coyote populations are typically many times greater and more widely distributed than those of wolves, coyotes cause more overall predation losses. However, an Idaho census taken in 2005 showed that individual coyotes were one-twentieth likely to attack livestock than individual wolves.

The coyote appears often in the tales and traditions of Native Americans—usually as a very savvy and clever beast. Modern coyotes have displayed their cleverness by adapting to the changing American landscape. These members of the dog family once lived primarily in open prairies and deserts, but now roam the continent’s forests and mountains. They have even colonized cities like Los Angeles, and are now found over most of North America. Coyote populations are likely at an all-time high.

These adaptable animals will eat almost anything. They hunt rabbits, rodents, fish, frogs, and even deer. They also happily dine on insects, snakes, fruit, grass, and carrion. Because they sometimes kill lambs, calves, or other livestock, as well as pets, many ranchers and farmers regard them as destructive pests.

Coyotes are formidable in the field where they enjoy keen vision and a strong sense of smell. They can run up to 40 miles (64 kilometers) an hour. In the fall and winter, they form packs for more effective hunting.

Coyotes form strong family groups. In spring, females den and give birth to litters of three to twelve pups. Both parents feed and protect their young and their territory. The pups are able to hunt on their own by the following fall.

Coyotes are smaller than wolves and are sometimes called prairie wolves or brush wolves. They communicate with a distinctive call, which at night often develops into a raucous canine chorus.

The Professional Wildlife Removal Company in your area utilizes an Integrated Wildlife Management Plan to successfully control coyote populations. Our programs are a combination of habitat modification, exclusion services, trapping and deterrents/repellents. If you are experiencing a nuisance wildlife issue with coyotes give the professional listed in this directory for your area a call and they will personally design an effective long-term solution to your coyote problem.

Average life span in the wild: Up to 14 years

Coyotes are very good swimmers. In areas of the northeast United States, where coyotes have migrated since the 20th century, the animals have colonized the Elizabeth Islands of Massachusetts.

For a complete factual and scientific description go to http://en.wikipedia.org/wiki/Coyote

If you are experiencing a Coyote human conflict and require a professional wildlife removal company click here to find your local vendor.